The results are now in and we would like to take this opportunity to thank Michael Symmons Roberts for his excellent contribution to the success of the competition. We would also like to thank all those who entered.

*All poems entered into the competition, were delivered with no identifying details to Michael Symmons Roberts, who read every poem before making his decision. 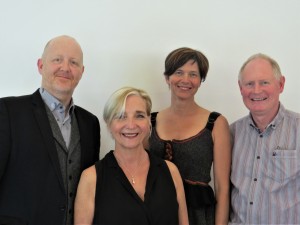 Poets & Players is one of the most significant and impressive poetry organisations in the country, the quality of the readings it puts on, its presence in the city is remarkable, so I’m delighted to be part of it in judging this competition. The standard was very high, I know judges always say this, but I’ve judged quite a few of these, there’s always a first sift where you move things out of the way and you think you can quickly establish these aren’t going to win, but the first sift really didn’t do much in terms of the fact that the quality was so high I was still left with a lot that were commanding serious attention.

I spotted you this morning
near Columba’s Bay – before the climb
towards the slate grey loch, just past
that split in machair where beach pushes through,
past the lambs going mental as they
race us to the fence posts, player numbers
painted on their backs, past fat pellets
of goose droppings and strewn button-top shells,
those smooth white spirals no bigger than tears
with gently wound mysteries –
in a hollow to the right, a sheep,
shaggy and wise, with high Finnish cheekbones
and an aquiline nose just like yours –
standing, staring straight at me
with two lambs suckling, one on either side like wings,
tails frantic as propellers: a light aircraft
flown in from the recovery ward
to watch our pilgrimage,
blessing each of us in turn as we
made our way to the pebbled bay
at the south of the island, the Atlantic
winking like a waggish aunt,
the mad scrabble for green serpentines
of which you are the queen.
I didn’t find a big one, not like yours, but a handful
of smaller, speckled stones like eggs
that I tucked inside my clothing
and carried back across the peaty scars
and the new wood bridge
to the sill of my hotel window with its perfect
view across the Sound.

This is a quiet, tender poem that impressed me more with each re-reading. The title and dedication suggest what TS Eliot called ‘private words addressed to you in public’ – in this case a poem as charm or prayer for recovery and healing. It is deceptively simple – an account of a walk through a landscape – but the details are telling and wonderfully, intricately drawn.

Sharon Black is originally from Glasgow but now lives in the Cévennes mountains of southern France. She is widely published and in 2016 won the Silver Wyvern Prize (Poetry on the Lake), the Prole Laureate Competition, was highly commended in Wigtown Poetry Competition and shortlisted in The London Magazine Poetry Prize. Her first collection, To Know Bedrock, was published by Pindrop Press in 2011. Her second, The Art of Egg, appeared with Two Ravens Press in 2015. www.sharonblack.co.uk

Poem with this cow in it

You know as well as I do the poor
cow’s a pretext, not the object
of attention. Sad, to lumber
unaware the uses you’ve been
put to. She tests one foot

patiently before another:
the wobble of a zen
balloon, a gas and shit
dirigible. The udder tide
migrates – to the parlour-

from the parlour- to the parlour –
soft as polyps, timed by the trickle
of a liquid clock. The cows
produce themselves along
the slurry path. In heaviness

that calls them to the artificial
suckle of relief they go –
blotchily, calmly, all together.
If she looks like the leader
it’s the flow behind her, she

was at the back when
the turn came. At this gate she
ponderously ponders as our host
the empty, forgone envelope.
We know who the loser is,

announced in backwards order.
The cows have voted with
their feet and left their
monuments around us.

Comments from judge Michael Symmons Roberts
2nd Prize: ‘Poem with this Cow in it’ by Ian McEwen

This poem caught my attention and held it from first reading. It begins with a playful title and a sleight of hand opening, but becomes surprisingly poignant. I was very struck by its linguistic inventiveness and wit.

Ian McEwen’s poems have appeared widely in magazines including Poetry Wales, Shearsman, Long Poem Magazine, Rialto and Poetry Review. The Stammering Man was a winner in the Templar pamphlet competition 2010 and his collection Intermittent beings was published by Cinnamon in 2013. ‘Father lost lost’ was highly commended by the Forward Prize judges in the single poem category 2014. He is a board member of NAWE and a former board member of Magma. Ian has four children and lives in Bedford where he promotes the Ouse Muse open mic.

My Life As A Bat

…A wish, to
……be a bat—ricocheting in a
………..cave, all caricature,
…..daring, some might say, devil, whose
………echolocation leads me to my prey.
….fierce, fiercer in flight,
………….ghost of an old world, gorging on twilight,
….haunting houses, yours,
………….infiltrating your study to spawn
….jelly-eyed babies on your laptop. My
………….kind laugh, cry and scream—
….listen. You pad to the window.
………….may even open it. There’s a
….new smell in the bedroom, not unfamiliar.
………….Ouch! We go for veins
………….plumped by sleep. I have very small teeth.
….remember. A wish some might think
………….strange but it’s not so silly,
….truth is, it would be fun to flit
………….under your half-open blind on a hot night, land,
….victorious in bed between the two of you like a
…………..weird forgotten child with waxen wings.
….X-ray vision I won’t have as a bat but I can smell
…………..your fear, see how guilty you look when, without
….Zopiclone she wakes, to a bizarre petting-zoo.

Comments from judge Michael Symmons Roberts
3rd Prize: ‘My Life As A Bat’ by Pam Thompson

This is a smart, witty poem with a real edge and a sting in the tail. It is formally ambitious and adept, built around an abecedarian structure, but manages to maintain its fluency and energy throughout.

Pam Thompson lives in Leicester. Her publications include Show Date and Time, 2006, (Smith/Doorstop) and The Japan Quiz, (2008), Redbeck Press. Pam is one of the organisers of Word!, a spoken-word night at The Y theatre in Leicester. She has a PhD in creative writing which links the science of holography and writing poetry.

A total number of 341 poets took part in the competition submitting a total of 813 poems. 291 poets (152 women and 118 men, 21 indeterminate, eg just initials) submitted a total of 665 online poems. We offered both postal and online entry options, 50  poets chose to submit  a total of 148 poems by post from all over the UK and also a couple of entries from overseas. This was an excellent and encouraging number and the overall standard was very pleasing.

We were delighted to welcome Michael Symmons Roberts as our judge, and offer our thanks and appreciation for his enthusiasm, professionalism and attention to detail. We received entries from all over the United Kingdom, also many from The Republic of Ireland. Overseas entries included: Spain, Italy, France, Netherlands,  USA , Denmark, Austria, Canada and Australia: a truly international event.

All entries were clearly addressed and, without exception, appropriate payments included. Thank you to all our entrants for your help in this and for your interest in our competition.

Thank you to everyone involved in the organisation, promotion and success of the fifth Poets and Players Competition. Please look out for future announcements about the 2018 competition.

Our 2017 competition is now closed. Thanks to all those who entered; the winners will be notified by 7 April and there will be a prize-giving event on 22 April with Michael Symmons Roberts.

We are pleased to announce the 5th poetry competition run by Poets and Players, one of Manchester’s leading organisers of poetry and music events.

OUR JUDGE FOR 2017 WILL BE MICHAEL SYMMONS ROBERTS

Michael was born in 1963 in Preston, Lancashire, UK.

His poetry has won the Forward Prize, the Costa Poetry Prize and the Whitbread Poetry Award, and been shortlisted for the Griffin International Poetry Prize and the T.S. Eliot Prize. He has received major awards from the Arts Council and the Society of Authors. He is a Fellow of the Royal Society of Literature, and of the English Association.

His broadcast work includes ‘A Fearful Symmetry’ – for Radio 4 – which won the Sandford St Martin Prize, and ‘Last Words’ commissioned by Radio 4 to mark the first anniversary of 9/11.

He has published two novels, and is Professor of Poetry at Manchester Metropolitan University.

What previous judges have said about the Poets and Players Competition:

What was electrifying about this year’s entries … was not just the wide and eclectic range of subject matters … but also the range of forms and tones, the many tongues and registers that together created a resonating and distinct entry of poetry.                  (Jackie Kay, 2016)

What a fabulously organised competition… One tries to dissuade people from the idea of competitions but if you’re going to have one have it like this. (Paul Muldoon, 2015)

This competition was scrupulously organised, and I loved the fact that the anonymity of the entries allowed each poem to speak for itself’. (Jacob Polley, 2013)

Michael Symmons Roberts will read ALL poems. All poems will be judged anonymously.

CHECKLIST: Completed Application Form; poems on separate sheets (with no identifying information); cheque or postal order made payable to ‘Poets and Players’ (if submitting by post); Paypal reference (if submitting by email).

Entrants retain copyright of their poem, however we would hope to receive permission to make a video recording of the winners reading at the awards ceremony for our website, and to publish the winning poems on our website and/or in the Whitworth Art Gallery for one year after the competition.