Once it was Chomolungma,
Mother Goddess of the Earth,
a face whose veil rarely lifted,
its whiteness the White Whale’s.

Now it’s like Elvis near the end,
a giant in a soiled jumpsuit,
blank, useful for percentages,
a sheet with all the music fled.
Comments from judge Paul Muldoon
1st Prize: ‘Everest’ by Colin Wilson

A brilliantly imagistic rendering of a place. The finding of likeness between Elvis and Everest, initially sonic, then extending to their bulk and slightly “soiled” status, is truly spectacular.

David Wilson lives in North Yorkshire. He turned to poetry a few years ago after reading ‘Midsummer, Tobago’ by Derek Walcott on the wall of a hospital waiting room in Leeds. His novel ‘Love and Nausea’ is published by Abacus, Little Brown. Mountains and climbing feature in some of his writing. His poem commemorating the great Polish climber Wanda Rutkiewicz won the Scottish Mountain Writing Competition 2014.

The deep cultural layer holds entire neighbourhoods
of wooden houses linked by walkways. It has swallowed
markets, citadels, several cathedrals.
Over time we have recovered comb cases,
leather knife shields and a thousand birch bark letters,
brittle and black as rain soaked leaves. One I flipped over
in the wet trench, breaking off a corner. Yevgeny
was my witness. I lost a husband, he a son
at the other Novgorod, now named for Gorky,
in Perm Thirty Six. Letters came back, unopened,
marked with the official stamp. We look at this letter,
imagine it in some future museum, safe beneath glass:

‘I write, but you do not reply
The forest is silent and I miss the smell of your skin
When I come to Novgorod, with the furs and honey
I will spend everything on [ ]combs
for your yellow [hair?].’

A painstaking attempt to reconstruct a complete history out of fragmentary evidence. A telling metaphor for our imperfect sense of how things are.

Maeve Henry is a novelist and poet, whose poetry has appeared magazines and e-publications including Mslexia, Prole, poetandgeek and various prize anthologies. She was longlisted for the National Poetry Competition, and commended for the Hippocrates Prize earlier this year. She is studying for an MA in Creative Writing at Oxford Brookes, and works as an assistant data manager at the Haemophilia and Thrombosis Centre at the Churchill Hospital, Oxford.

and a careful rasher of bacon
laid with grace. A tray of tea follows,
breaking the silence with its little bell

and always you are asked: Is it enough?
Would you like some more?

Along the coast
from this butter-scented room
in a small town with seven castles,

through three loughs, a city
and a pinball of glens and arches

you’ll be asked the same questions: Is it enough?
Would you like some more?

Soda and potato, wheaten and oats,
blood and guts, sunny side up.

witty take on the “sunny” attitude of a beleaguered nation set against their diet of “blood and guts.”

Janine Pinion is based in Wirral, Merseyside. She moved from Belfast to study at Liverpool College of Art and has exhibited in the North West and Ireland. She has had poems published in Ambit, Iota, Interpreters House, Smoke and other magazines, and included in anthologies, most recently ‘Sculpted’ (North West Poets 2013). Her poetry has been described as visual and enticing, based on subjects such as an Irish childhood, missing people and postcards of modern life. http://janinepinion.com

They call the visitors who go around to all the houses on New Year’s Day to wish everyone a happy new year “pilgrims”.

From The Guest Cat by Takashi Hiraide,translated from the Japanese by Eric Selland

In Britain it’s a dark-haired man with a lump of coal
first-foots good fortune into our homes.
We draw a reverent breath as we open the door.
For a brief pure time we may believe:
this interlude is sanctified,
unspoilt, so clean
it runs us away hand-in-hand with hope until
it bumps against the world’s pain, so fast,
and the flow of cruel days rushes on regardless
of how we try to dam it and send out help.
Never far away is the one we don’t talk about
who’ll arrive in his own time and let himself in.

Frances Nagle’s publications are Steeplechase Park (Rockingham Press), The War in Fraxinus Excelsior and a pamphlet of poems for children calledYou Can’t Call a Hedgehog Hopscotch, both from Dagger Press. She lives in Hazel Grove, Stockport.

Come noon, I lumbers into the ring & quietly I disrobes.
I has to wait, till Gas Man struts out
onto the grassy knoll, sucking at his orange
with supercilious air. He tosses the peel

at the chanting crowd, booms, So! You’re Bill Neat,
The Bristol Butcher. I’ll knock more blood
out of thy great carcase than thou ever knocked
out of a bullock’s! Straightway I head-fakes him

to the left, but gets a liver shot in the right.
I’m down, a lifeless lump
of lard an gristle. Is that it, finished,
in the first bleeding round?

I thinks on the wife, the shame of it,
& I’m up on me feet, me arms
like sledge-hammers, I holds him in a clinch
rabbit-punching the back of his skull

till he sinks; blood drains from his ugly mug,
out his eyes, out his nose, out his ears.
But he heaves himself up,
and smiles his ghastly smile.

Eighteen rounds later, his brow screwed up
against the setting sun,
he falls for the last time. I stoops
& limply shakes his broken fist – the sign

for my homing pigeon to take to the skies &
fly to the bosom of my beloved wife – the message
Alas for Mrs Hickman!
attached to its little pink leg.

M.J. Oliver has a degree in Fine Art from Reading University and an MA from Falmouth University. She lectured and exhibited widely in Scotland and England until 2005, when she switched to writing full-time. Since then she’s won quite a few prizes and had poems accepted for publication in UK and the States. She’s currently writing a novel set in Saskatchewan during the 1930s. She lives in Newlyn, Cornwall.

Someone Else (by Maeve Henry)

The quilt still smells of you, but your bedroom walls
are pocked with blu-tack, football teams all gone.
They say you crossed the border, walked into Syria.
You will head home, I tell them As you used to
come back from parties, drunk on girls and spliffs.
You will come in, yawning, lifting the lids
of my saucepans, grabbing a spoon. I will say,
your father is worried. Why are you breaking my heart?
It’s done. It’s broken. I was looking the wrong way,
like the guards at the airport. They caught you on camera,
clear as the scan of my womb. Now someone else
is being born, a boy with a gun, screaming obscenities.
And the view from your room is just the same:
that lilac bush, a blackbird, the washing line.

Maeve Henry is a novelist and poet, whose poetry has appeared magazines and e-publications including Mslexia, Prole, poetandgeek and various prize anthologies. She was longlisted for the National Poetry Competition, and commended for the Hippocrates Prize earlier this year. She is studying for an MA in Creative Writing at Oxford Brookes, and works as an assistant data manager at the Haemophilia and Thrombosis Centre at the Churchill Hospital, Oxford. 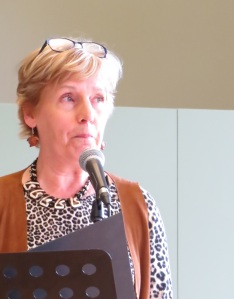 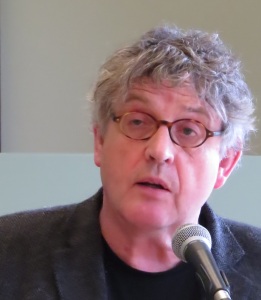 This was an excellent and encouraging number and the overall standard was very pleasing. We were delighted to welcome Paul Muldoon as our judge, and offer our thanks and appreciation for his enthusiasm, professionalism and attention to detail.

We had entries from all over Europe (Italy, Netherlands, France), from all corners of the UK, several entries from Eire and the Scottish Isles then entries from the wider world: USA, SA, Australia, the Far East and the Sub-continent. A truly international event.

All entries were clearly addressed and, without exception, appropriate payments included. Thank you to all our entrants for your help in this and for your interest in our competition.

Thank you to everyone involved in the organisation, promotion and success of the third Poets and Players Competition. Please look out for future announcements about the 2016 competition.

The winners of our 2015 competition have now been informed. Thank you to all who entered.

We hope you will join us for the prize-giving event on 30 May where Paul Muldoon will announce the winners.  Click here for event details

The poets and players 2015 competition is now closed

thank you to all who entered

We are pleased to announce the 3rd poetry competition run by Poets and Players, one of Manchester’s leading organisers of poetry and music events.

OUR JUDGE FOR 2015 WILL BE PAUL MULDOON

Paul Muldoon has published eleven major collections of poetry along with numerous other works. His latest collection, One Thousand Things Worth Knowing, will be published in the UK by Faber and Faber and in the US by Farrar, Straus & Giroux in January 2015.

Paul Muldoon is a professor of poetry, as well as an editor, critic, and translator. He is winner of the Pulitzer Prize for Poetry; T. S. Eliot Prize; Irish Times Poetry Prize; Griffin International Prize for Excellence in Poetry; Aspen Prize for Poetry. He is Fellow of the Royal Society of Literature, American Academy of Arts and Letters.

What previous judges have said about the Poets and Players Competition:

This competition was scrupulously organised, and I loved the fact that the anonymity of the entries allowed each poem to speak for itself’. (Jacob Polley, 2013)

Paul Muldoon will read ALL poems. All poems will be judged anonymously.

CHECKLIST: Completed Application Form; poems on separate sheets (with no identifying information); cheque or postal order made payable to ‘Poets and Players’ (if submitting by post); Paypal reference (if submitting by email).

Entrants retain copyright of their poem, however we would hope to receive permission to make a video recording of the winners reading at the awards ceremony for our website, and to publish the winning poems on our website and/or in the Whitworth Art Gallery for one year after the competition.