Thursday Lates at the Whitworth: Ira Lightman and Andrew McMillan with music from Heather Bird

Ira Lightman is a public art poet. He appears frequently on BBC Radio 3’s The Verb, and last year made a Radio 4 documentary about Pound and recession economics. A keen mathematician and ukulele player, he loves performing, especially collaborating and improvising in the moment. His books are Mustard Tart as Lemon (Red Squirrel), Duetcetera (Shearsman), and I, Love Poetry (KFS).

Andrew McMillan was born in South Yorkshire in 1988; his debut collection physical was the first ever poetry collection to win The Guardian First Book Award. The collection also won the Fenton Aldeburgh First Collection Prize, and was shortlisted for the Costa Poetry Award and the Forward Prize for Best First Collection. It was a Poetry Book Society Recommendation for Autumn 2015. In 2014 he received a substantial Northern Writers’ Award. He currently lectures in Creative Writing at Liverpool John Moores University and lives in Manchester. 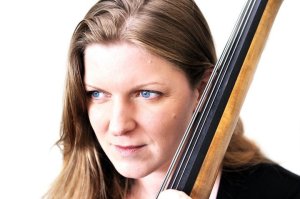 Heather was brought up in the Eden Valley in Cumbria where she was taught flute by a saxophonist, double bass by a cellist and received an eclectic musical education playing in youth orchestras, jazz bands and folk groups. After moving to Manchester she started ventured into acid jazz, and techno alongside orchestral playing.

While studying at the Royal Northern College of Music she continued playing jazz and electronic music outside. She then lived in Angola and Spain playing more jazz, lots of tango and attempting flamenco before returning to the UK in 2010.

Heather founded Classical Evolution in 2011, which brings classical music to forests, beer tents and anywhere you’d least expect to find a chamber ensemble. It all began with a performance of the Dvorak quintet in Matt & Phred’s Jazz Club with violinist Ben Holland. Classical Evolution commissions new works, runs courses and puts on monthly gigs across the UK and New York City, including the only classical open mic night in the UK at Night & Day.

She plays regularly for many orchestras in the UK including Manchester Camerata and the Orchestra of the Age of Enlightenment as well as playing lots of chamber music involving non-classical musicians and a diverse range of classical and non classical projects.