APOLOGIES, DUE TO UNFORESEEN CIRCUMSTANCES, THIS EVENT HAS BEEN CANCELLED: click here for full details

Please come along to our annual competition event where judge Kei Miller will announce the winners who will read their winning poems. Kei will also do a reading of his own work. The venue is the Whitworth Art Gallery, time 2.30-4.00. The event is free and everyone is welcome.

Kei Miller is a poet, novelist, essayist, short story writer and broadcaster. His many books include the novel Augustown (W&N, 2016) and poetry collection The Cartographer Tries to Map a Way to Zion (Carcanet, 2014) which won the Forward Prize (Best Poetry Collection of 2014). In 2010, the Institute of Jamaica awarded him the Silver Musgrave medal for his contributions to Literature. He has a PhD in English Literature from the University of Glasgow and is currently a Professor of English and Creative Writing at the University of Exeter.  Kei Miller is represented by Renaissance One 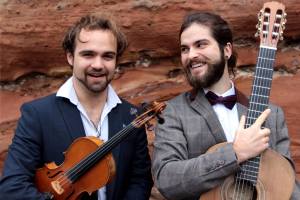 Oscar Tabor started learning the violin at the age of 4, due to the influence of his older sister’s piano playing. His love for music was further impassioned by the tuition of Dr Robert Jacoby, with whom he started learning at the age of 9. In the years that followed, Oscar played solos with the Dorset Chamber Orchestra and performed in concerts and competitions in and around the South West of England, often with musical members of his family.

Oscar currently studies at the Royal Northern College of Music and is taught by the Czech violinist and composer Pavel Fischer. Fischer’s love for Eastern European folk music has since inspired Oscar to play a wider range of genres. These include working with the Klezmer band Kibitz, and managing a gypsy jazz outfit named the Misophone collective. In Oscar’s 3rd year studying at the Royal Northern, he met Marcus Forster, and their mutual love for a myriad of genres led to them to the forming the Daphne Duo.

Young guitarist Marcus Forster first took to the electric and bass guitar playing various styles and fusions from blues and folk to rock and metal, performing and recording with bands throughout his home county of Northumberland. At the age of twelve, Marcus turned his interest to focus on the classical guitar.

After graduating from school, Marcus had a short but fruitful career in arboriculture before beginning a Bachelor of Music degree in 2015, studying under the renowned guitarist Craig Ogden at the prestigious Royal Northern College of Music in Manchester. Marcus is currently in the fourth year of his undergraduate degree.

Daphne Duo appears by kind permission of the RNCM.